He changed my life in the two weeks he coached me.

Tim Maloney was coaching at UMASS in 2007 when he led my Athletes in Action (Christian sports organization) team on a tour to Berlin, Germany. Our team, comprised of guys from universities around the country, would be mixing basketball with ministry. Although I haven’t seen Coach Maloney since that trip, over a decade later I still regularly communicate with him because of the profound impact he had on me.

Coach Maloney’s words were simple, but I remember them exactly: “Trent you’re a pro.” I can’t tell you how significant those four words were to me in that moment. I was about to be a junior in college and had never thought about playing professionally. It wasn’t even on my radar — not because I didn’t want to, but because I didn’t believe I was capable. I had unknowingly put a ceiling on myself. I thought playing for the Illini (a childhood dream) was the pinnacle and final chapter of my basketball career. Coach Maloney not only spurred me on to a lengthy pro career, but he also taught me two important lessons in the process:

The Power of Words
Proverbs 18:21 states, “The tongue can bring death or life…” Our words have life changing potential — for better or for worse. Coach Maloney called out the greatness in me. He saw something in me that I couldn’t see in myself. I think about the impact he had on me and realize I can do the same for others. I too can seek out ways to lift up others and help them see the potential they possess. I love this quote from Napoleon Bonaparte, “A leader is a dealer in hope.” Our words can give hope to anyone in any situation. It’s easy to point out where others fall short. It’s more difficult to look past the flaws and shortcomings and communicate to someone the value and promise they have.

Amount of Care > Amount of Time
I often feel like I don’t have enough time for it all or that time is slipping away. But when I think about the influence Coach Maloney had on my life, it changes my perspective on time. He showed me that when you fully engage + seek to understand + look for opportunities to encourage → you can truly change someone’s life. It’s not always about the amount of time but the quality and intention you put into that time.

Believe me, I was not a “can’t miss” basketball prospect! Anyone with a little bit of basketball knowledge could’ve picked out plenty of flaws in my game. Coach Maloney’s impact went way beyond hoops. I know he also saw insecurities and fears I was holding onto. The real breakthrough wasn’t in becoming a pro basketball player; it was in reminding me of my worth and enabling me to see I was capable of so much more than I believed. 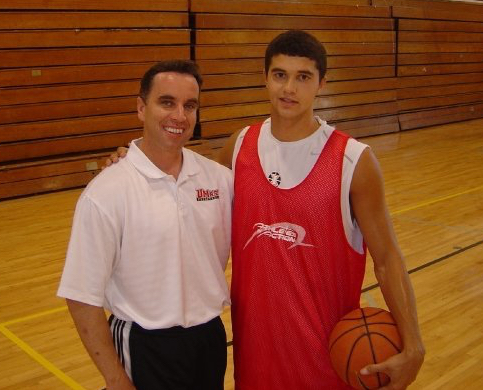 Explore Further:
The recent ESPN article “Inside the relationship that unleashed Steph Curry’s greatness” is a fantastic look into how Davidson College coach Bob McKillop helped Curry take his game to another level. The result: Steph Curry has changed the game of basketball like only few others in the history of the game. The article also tells the opposite story of how McKillop’s words, early in his coaching career, made another young, promising player quit. Words are powerful…

Quote:
“…he stayed in my ear because he saw my potential before I did.” – Curry on McKillop